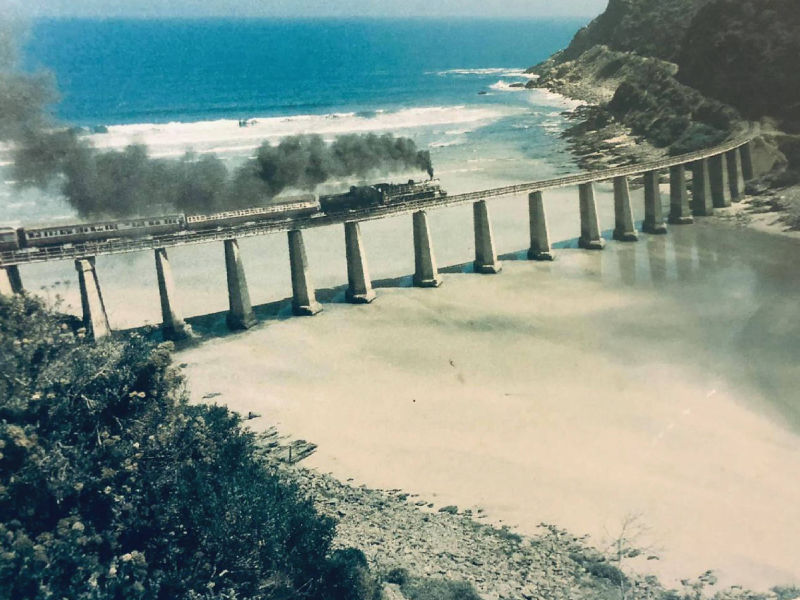 The name “Kaaiman”: According to the information that Mr Botha has prepared for his information board, the name Kaaiman is a corruption of the Nama word for ‘great’, namely ‘kei’, combined with the Afrikaans word ‘man’. Apparently the Khoi people believed in the Great Snake (and also probably the Water Snake), but because they would not call it by its name, they substituted ‘snake’ with ‘man’. So ‘kei’ became ‘kaai’ and thus formed the word ‘kaaiman’. The traveller Henry Lichtenstein supplied another explanation, though. He said that the name was given because a large species of the leguan [die likkewaan] was found in this river, which was erroneously called ‘kaaiman’ after the American crocodile, which is a much smaller species than the crocodile of the Nile. It was therefore understandable that this large leguan was confused with the small crocodile or ‘cayman’. The leguan is of course not a crocodile at all, but is amphibious and perfectly harmless, living upon vegetables, earth-worms and other insects. It is said that it is mild in nature and so stupid that it is easily caught (Lichtenstein 1928:233).

The fact that there are two or more explanations for a placename is of course very common, and it is often not possible to confirm which is true. The first passages through Kaaimansgat We know that the Khoi-Khoi people and probably the San as well (by the way, there were no such people as Khoisan; that is an artificial academic term that refers to both cultural groups, the Khoi-Khoi and the San, in a way that does both of them complete injustice; there was a lot of debate on this matter in recent years, but most academics currently agree that the term should not be used) must have crossed this river for centuries before European settlers and travellers came this way. But those crossings were of course not recorded in writing, and therefore we don’t have any evidence, record or dates that can supply particulars. The first recorded passage at Kaaimansgat was that of Ensign Beutler on 13 October 1752 on horseback when he headed eastwards to do some scouting for the Dutch East India Company. Then in October 1778 Governor Joachim van Plettenberg crossed here with three oxwagons. But the real interesting reports of crossings are found in the journals of the travellers. I will refer to only three of the most famous of them, the first being the Frenchman Francois le Vaillant. He was a naturalist and especially an ornithologist, but also a writer and an artist who made wonderful sketches and paintings of the birds that he found. He visited the Cape between 1781 and 1784. In January 1782 he left Cape Town and he entered Outeniqualand from the Great Brak River Heights. On reaching the top of the heights, he remarked: “[…] we were well repaid for all our fatigue, by the noble view which opened on our sight; we had here an opportunity of admiring the most beautiful country in the universe.” He camped at Pampoenkraal (now Woodifield), near Saasveld, for about a month. Before he departed from there, Le Vaillant did some scouting to ascertain the level of the river and as a result decided to wait a few days, because it was “too much swelled and too rapid” (1790:117).

He had a road or a path made for his wagons through the Kaaimans cleft, but Lichtenstein remarked some 20 years later that he could have saved himself the trouble, because the colonists already had a path made through this dangerous cleft. On 30 April he left Pampoenkraal, starting downwards towards the Kaaimans River. He described his departure as follows: “[…] and casting my eye, for the last time, on the delightful hermitage of Pampoen-Kraal, quitted it with the same regret as that with which a lover separates from his mistress” (122). On the day of passing through the Kaaimans, he remarked that notwithstanding all his precaution, they “found great difficulty at Kayman’s Hole” (122). Die volgende reisiger na wie ek wil verwys, is kaptein WBE Paravicini di Capelli, wat deur Kaaimansgat getrek het ook in die maand April soos Le Vaillant, maar 21 jaar later. Hy was die Aide de Camp van generaal Janssens, goewerneur van die Kaap in die tyd van die Bataafse Republiek van 1802 – 1806 (dit was die tyd toe die Kaap weer Hollands was). Op 19 April 1803 het hy en sy geselskap vertrek van Outeniqualand ooswaarts, toe hulle die Kaaimansrivier moes deur. Paravicini di Capelli skryf in sy dagboek oor hierdie deurtog: “Men had ons voorspeld dat wy heden een der slegtste wegen moesten passeeren welke wy op de geheele reyze zoude aantreffen; ook vonden wy aan Kaaymansgat komende, dat men niets overdreven had; de tocht over de Hottentotsch Hollandsch kloof was in vergelyk van deeze steile diepte een effen pad” (1965:35). (He found that the warnings about this path and crossing, namely that it would be the worst of the whole journey, were not exaggerated; on the contrary, the journey over the Hottentots Holland mountains was nothing in comparison.)

The one traveller who really supplies an accurate and comprehensive description of the nature, environment and the details of the crossing, was Henry Lichtenstein. A very intelligent individual, medical doctor by training, expert on nature, traveller and writer, Lichtenstein was also in the service of General Janssens, in his case in the capacity of family doctor and private tutor of Janssens’ son, also called Henry. Together with Commissioner-General JA de Mist, Lichtenstein started off from Cape Town on an extended tour of the Cape coastal regions and interior, in October 1803. They travelled relatively fast and reached Outeniqualand in middle December and departed from there on 22 December. Lichtenstein’s description of the horrors of the road, the descent, crossing through the river and the ascent on the other side, makes fascinating reading. He describes the way around the cleft or kloof, before they reached the actual river, and said: “[…] when arrived at the top, the way turns suddenly to the right, at a point where a prospect is presented of so extraordinary a nature, that perhaps the traveller will meet with nothing similar to it in any part of the world. The monstrous gulph is now directly beneath, and at the depth of a thousand feet below him the mountain torrent roars over its stony bed […]”. A little further he reports: “The road now descends, and after having crossed the stream, ascends again a height, which, as we saw it from this point, I will not say appeared exceedingly steep, it actually appeared perpendicular…” (1928:235).

Immediately after this follows a section of the most beautiful poetic language, describing the view towards the sea. Then he carries on to describe the actual descent to the river itself, the crossing and then the ascent again: “The task is the most difficult at the very beginning of the ascent, for here the road goes almost as it were in steps: that is to say, first comes an immoderately steep place of three or four feet, and then for a short interval it becomes nearly a flat. The greatest difficulty is when the waggon is to be drawn up one of these steps, for in proportion as the leading yokes of oxen get up the steep part upon the level, they no longer share in the draught, so that at length almost the whole of the draught rests upon the hindermost pair” (236). At this point Lichtenstein had already walked ahead of the waggon and sat down for a rest. He said: “Indeed, as I sat upon the stump of a tree above, contemplating this scene, I could not help being deeply affected by it.” The almost emotional description of his experience as he sat there, refering to “the narrowness of the gulph, the deep shadows resting in it, the tossing of the stream, the rushing in of the waves from the sea, the screaming of the waggoners, the lashes of the long whips with which they were urging on the poor labouring animals, and which were re-echoed on all sides from the surrounding rocks”, (237) really is touching.

Thanks for filling out the form!